Welcome to the official Web Page of Ever17 (not the game..) Time traveler, avid Internet user and ????the actual Hatsune Miku???????????
This page is home to a buncha stuff.
Here, what I say goes, so if something looks off to you don't get all confused...... This is MY super gimmicky shit HTML cringe ass site!

Don't steal my code. not sure why you'd take anything here but if you get the urge email ulala@cybergal.net i guess

DIRECTORY... or something
EVER17 GUESTBOOK!
The super-official Tally Hall image gen made by me and me only and not Rock!
Rock's page
Cvrs' page

--------------3/14/2011--------------
Ever17 hear. I got on my computer to fix the dead 88x31s (Rock informed me of them breaking on my SpaceHey and told me they were fine here, but I double checked and they were WRONG. Rock, when you see this, I hope you're very disappointed in your actions.) after the site they linked from's certificate expired. I'm too lazy to locally host so I used another file hosting site.
In non-technical words, any image you want to display on your site must come from somewhere. I copied the link to an image off another site, but it's security expired, so Neocities doesn't want me to link to that image anymore. I had to upload it through another site.
If you didn't read above, Rock is my best friend who helped me tremendously with this site. They're asleep right now, so I'm resisting the urge to wake them up via our "LDR" bracelets. I'm too nice for that though.
At the moment, I'm trying to finish this site's final layout, but I'm not sure that'll ever happen. This is just my little internet corner I pay 5 dollars a month for, so there's no way I'll be professional with it. Hopefully this doesn't turn out as one big WCAG violation, but I'll definitely mess around a bunch with it in the future.
Anyways, heading out, I've got a message, "Shoutout to Liyah!". That's all.


--------------3/22/2011--------------
Yo! I've been putting off the development of the V3 voicebank of my personal UTAUloid recorded with my current voice for months now, but today I've decided to finally begin looking for someone to oto her, despite my overwhelming fear of being trashed on for it.
If you don't know, UTAU is a vocal synthesizer a lot like a free VOCALOID, but often voicebanks are lower quality and there are generally more issues. My UTAUloid, Yumi is supposedly a very realistic robot made to look human. (In all her art she looks cute but in real life she'd look pretty uncanny valley-ish...)
When you record for an UTAU voicebank you need to take around 150 samples for a basic single tone CV voicebank. After, someone has to oto (configure) it so that the UTAU software knows where the consonant and vowel end. This is what I'm looking for.
Sorry for the cutoff to anyone who was viewing that last paragraph.. I got off track and forgot what I was doing.
Anyways, instead of dancing around it like usual, I'm getting out there and figuring out an oto.. I hope!

--------------8/31/2011--------------
Hello netizens!!!!!! I'm popping in to say I'm starting classes back up again soon, so I'll be updating stuffs a lot more in the near future. This might sound a bit self-contradictory, but I'll explain; simply enough, I just don't focus a whole lot and spend a lot of my time online during class, which is actually beneficial considering people think I'm really smart for doing basic web design and programming! So I'll see you guys in 6ish days..!

--------------10/31/2011--------------
Hey guys! If you couldn't tell from the huge time gap, I've been unable to work on the site, which sucks because I can't do much blogging anymore, and also bcz I really, really wanted to give this shitty HTML a facelift.
I've had quite a heavy workload compared to last year, so my free time is usually spent on that typa stuff -- which is EXHAUSTING, so if you're one of the many super hardcore megafans of this site, you should do my homework for me.
Anyways, happy Halloween! 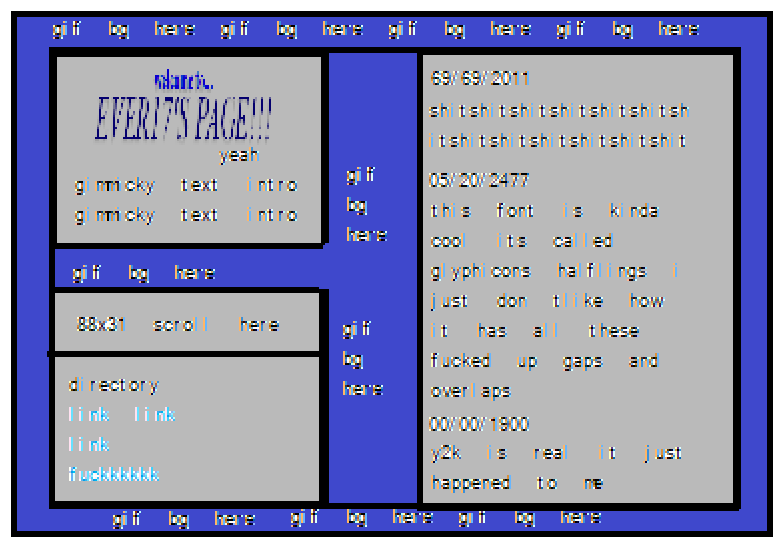 Heeey, you're not supposed to scroll!